SB-Projects came into existence because I wanted to have a place to showcase my own projects, at the time especially my SB-Assembler. I also had a lot of disorganized information about various subjects lying around. A web site would seem to be a good place to gather all this information, mainly for my own reference, but others could benefit from the information too. Remember that this was before Wikipedia!

Why is the web site called SB-Projects? Simple, my name is San Bergmans and the web site contains my projects. That's all there's to it. 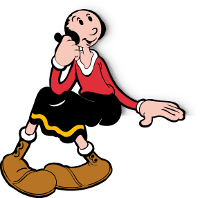 This web site can be served up by two web servers. The one who serves you is determined by round-robin DNS. This way one server can fail without seriously affecting the service, which gives me time to fix the problem if one should arise.

All my computers are named after Cartoon characters. My VPS machines are named after characters from the Popeye cartoons, just because Digital Ocean was my first VPS hoster. And Popeye is, by profession, no stranger to those vast pools of water.

In case you're wondering, this page was served up by Olive Oyl.

Get $100 worth of free credit for running your own Virtual Private Server on Digital Ocean by subscribing through this link. You'll have to pay only $5 to get a total of $15 credit, which enables you to test drive their cheapest VPS for about 3 months. And if you don't like it, then simply don't add new credit. No strings attached.

Scaleway offers a more powerful VPS for a lower price than Digital Ocean does. However they were still growing when I joined them, which means that the controls were not as smooth as those from Digital Ocean. For instance IPv6 works now, but in the beginning I had to jump through some hoops to get it working together with a firewall.
Lately however I have no complaints about Scaleway anymore. And I should praise their help desk, they've helped me out very quickly every time I had problems.
O, and did I mention that they also have dedicated ARM servers for the same price as a shared VPS?

Previously every page on my site had a navigation column on the left hand side of the page. I didn't really like those and they didn't integrate very well in a responsive web site either. I also hate the heavily loaded pull down menu's found on many a web site, I always tend to click on them before I notice that they open up a long list of sub-menus. So I decided to go into a drastically new direction.
On every page, in the top right hand corner, you'll find 4 buttons: Back, Home, Index and Forward. These buttons are always there, whether active or not, so you don't have to scroll up and down to find the menu buttons. If you're reading a multi-page subject, you can simply go forward and backward sequentially through the pages, which is the natural thing to do. The Index button brings you back to the first page of a multi-page subject. Such a page may contain an index to the other pages of the multi-page subject if I think that it useful. You'll know this when you see a little arrow next to the index button .

Finally I'll leave you guessing where the Home button would lead you (hint: Home).

Fortunately I don't have to earn my living from my web site. However it is still nice to get some money out of it to cover the expenses for the hosting. Everything extra will probably be spent on new projects, I still have tons of ideas for new projects you know.
I use Google Ads for the sponsoring. Please show some appreciation if you like the information you find on my web site and turn off your ad-blocker and visit some of the sponsor's web sites. It keeps the internet free!

For a while now I can also easily accept donations made through Paypal, in the hope that one day I can completely turn off those ugly ads.

SB-Projects exists since 2000. It all started as a couple of plain HTML pages, hosted by my ISP. In my town we didn't even have broadband internet back then, so I had to use a dial-up connection to get to the internet. As a matter of fact I can't even remember who was my ISP back then.
On 30 April 2002 I have registered my domain name sbprojects.com and used a professional web hosting provider to host my web site. It would take almost another year after this before my town was finally connected to the internet super highway, at 512 k bits per second!
In 2015 I have decided that this professional hosting provider was way too expensive for me. They charged almost €100 per year for it. So I've moved it to www.one.com, where all my other web sites are hosted, for about €25 a piece per year.
In 2016 I'm gradually changing my location again. I'm going to host all my web sites myself, on a Virtual Private Server (VPS) from www.digitalocean.com. This is not only cheaper if you have more than 4 web sites, it also allows me to use git as a versioning system easily. And on top of that, the smallest virtual server from DigitalOcean is about 3 times faster than the machines from one.com.
By the way, this VPS has one other advantage, it also supports IPv6!

In the mean time Olive Oyl was added to assist Popeye. Not that Popeye was so busy, no simply to get some redundancy. And for a price of €3 per month at Scaleway I couldn't resist Popeye's request for having a girl friend any more. But I let it come out of his own pocket!

SB-Projects is still written in pure HTML, like it always has been from the beginning. The main reason I use PHP is to be able to make standard functions of things like the header and the footer. Otherwise I would have to change some 200 pages if I wanted to change just the tiniest thing in the layout.

Before 2015 I used a very crude HTML layout. Changing that would involve editing all my pages. Eventually I couldn't resist the temptation any more to convert everything to HTML5, using Twitter Bootstrap to make the pages responsive. Now my pages are also mobile friendly, which is a huge benefit these days.
I can't exactly remember how often I have changed the style of SB-Projects before, it could be 3 or 4 times I guess.

Why don't I use Joomla, Wordpress, or Drupal, like everybody else does? Simple, because I don't like those tools. I hate the necessity to update the software every other day at the risk of being hacked. And I don't need a complicated tool like that anyway, I'm the only editor on my site.

Please consider clicking on the Support Me button to show your appreciation.

My way of keeping this site alive.